The Front Porch vs. The Man 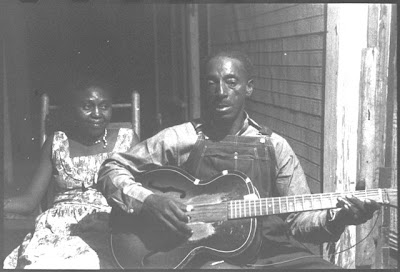 So you open the door to the world's music room and before your eyes is a vast and endless hall which stretches out into eternity.  For every song that has ever been created, there is a painting on the wall.  Some paintings carry lyrics within them - others carry only musical instrumental images from which every viewer sees their own unique lyric.  Every painting has the artist's signature in the bottom right corner.

Many - but not all - of the largest paintings have signatures stamped in the bottom corner bearing the mark of the musical factories and sweat shops of the last 60 years.  Paintings which were created under the bull whip of men with their gaze fixed upon money, profit, and fame - who stifled and manipulated the artists who found themselves with "the man's" bit in their mouths and harnessed to his wagon as he whipped them on up the mountain of money.  Faster, harder, faster, harder....radio tours, three cities a day....faster, harder, faster, harder.  They funded your album, so now they own your soul.  They hung a carrot made of fortune and fame on a stick in front of the team pulling their wagon.  Hipsters, insiders, and outright thugs who couldn't sing or play a note, crafting the course of popular music in back room meetings to which the Spirit of creativity was not invited.  The masses who unfortunately had never seen a painting by Rembrandt, Michelangelo, da Vinci, Monet, Dali, or Picasso, hailed many of these works of motel art as the works of genius.

However, as you walk down this endless hall, you are overwhelmed by the vast and unending display of small and obscure paintings - paintings which carry an entirely different vibe.  These paintings convey true messages of life, of emotion, of pain, of joy, of struggle, of victory, of hope, of faith, of trials, of humor, of sadness, of love.  You read the signatures of these paintings and find names the world never knew, or which have been forgotten.  Many of these paintings have only been seen by a handful of people.  You have to search out these paintings out as they are not displayed in the "art" galleries of the world's popular media, but rather are found in the obscure and hidden reaches where the Spirit of creativity seems to thrive.  Small jazz clubs in NYC, front porches in Appalachia, tiny villages in Sudan, the pubs of Ireland, street corners in Argentina, kitchen tables in the Mississippi Delta,  rock & roll bars in Dallas, the isolated practice rooms of the conservatories, the drums and voices of a church deep in the bush of Uganda, the projects of the inner cities, and the humble homes of the poets and minstrels all over the world.  These paintings were painted by PEOPLE who were ALIVE, who faced CHALLENGES, who lived in a CULTURE, which had a MESSAGE, which HAD to be SPOKEN as it was BURNING in their SOULS.

As you walk down this endless hall of music, you find yourself passing over the large - sometimes gigantic - motel art paintings, and being drawn to the true works of ART which are most often very small - even tiny - paintings.  You realize at last that in the world of music, SIZE DOESN'T MATTER, and you find yourself FREE to create songs which carry the message of your life, your culture, your soul and Spirit.

Its called MUSIC THEORY, not MUSIC FACT because its never been proven

Looking back over the last four decades of my study of music and the guitar, I can see the mixture of academics and art.

On the academic side, I had to learn technique, how to play chords, how to play melodies, how to see the chords nested inside of scales, how to understand how notes "outside" of the scale worked, and a truck load of other rules and principles of music.  There is a vast mountain of knowledge appropriately called "Music Theory" which you can study for years and years and years.

On the artistic side, I had to develop the ability to recognize when the music coming out of my hands  was MUSIC, not some exercise of purely mental origins.  There is a magic and mystery in the creation of music.  You can play around with a scale or mode or melody for years, and suddenly a micro-tweak of the timing of certain notes or voicings pops that sound into the world of ART vs. ACADEMIC.  Honing your hearing to recognize those moments of ARTISTIC CREATION is the most important thing you can do as a musician.

In my experience, I found the following to be true.  When I am focused on the OUTPUT of my playing (e.g. play this lick over that chord, play a certain chord in a certain song a certain way, etc.), I tend to be living in the ANALYTICAL side of music.  However, when I am focused on LISTENING and EXPERIENCING the music coming out of me - when I turn off my mind and allow my heart and ears to drive the car - then I tend to be living in the ARTISTIC side of music, and that is where the magic happens.

If you study music history, you will find an evolution of sound which runs converse to the devolution of languages.  While languages tend to SIMPLIFY over the millennium (e.g. ancient Greeks had over 400 forms of the verb, "Stop"), music has trended in the opposite direction with more complex harmonic structures being introduced over the centuries, greater tension, greater intensity, and greater communication.  The amount of music theory a serious student of music has to master today is a vastly larger body of information than that which his predecessor had to master a thousand years ago.

NOTE:  A significant amount of popular music of the last few decades may be an anomaly to this trend, as much of it has been simplified by the corporate drive to turn music into a BUSINESS vs. an ART FORM.  The discovery that great sums of money can be made from music driven solely by profit has opened Pandora's music box which has resulted in lowering the world's standards of music appreciation.

Not all musicians are created equal.  In fact, everyone of them is unique and different and has a individual voice to add to the world of music.  Some outstanding musicians know very little music theory, some musicians who know vast amounts of theory end up creating very little great music, while others may embody vast knowledge AND creativity.  There is no formula.

The acquisition of the knowledge of music theory is not detrimental to the creation of ART, as long as the carrier of that theory does not allow the theory to become his master and dictator of right and wrong. We must always remember that it is called MUSIC THEORY, not MUSIC FACT - it has NEVER BEEN PROVEN!

We must allow ourselves to get outside the box and experiment with harmonies that are "wrong" according to music theory, but "right" according to our ears.  Our ears are the ultimate litmus test of right and wrong when it comes to music - not the academic rules set down in the universities and schools of music.

A pristine example of this is the bridge section of Stevie Wonder's song, Living For The City....


(click on the score below to see a larger image)

While Stevie Wonder obviously knew a great amount of music theory, this work of genius was not the result of analytical thinking driven by the brain.  It obviously had it roots in the artistic realm of the ears.  Yes, he had to KNOW how to make half-dininished chords and how to change meter.  Yes, it can be dissected and analyzed, but no comparable work of music will result from that.  Mr. Wonder obviously went outside the box of music theory and into the realm of wonder to find this melody and harmonize the descending bass line (G, F, E, Eb, Db, Cb, Bb, Ab, G) and unmistakable melody.  I can assure you that no music theory formula will generate the chord progression used in this piece of music.

So while music theory is valuable - extremely valuable - don't allow it to become your North Star in your journey thru the realm of music.  Dare to deviate from the well worn paths and experiment with ideas that are "wrong" according to theory.  You may well find some hidden treasures out there beyond the walls of the fortress of music theory.
Posted by David at 6:51 AM 10 comments: