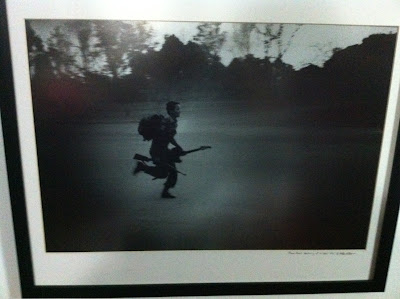 My little brother who is a film maker is currently on a round-the-world trip filming in some remote places (Nepal, India, etc.).  In one of the homes he visited in southeast Asia the picture above hung on the wall.  In his e-mail to me he explained, "This photo was taken the day the Khmer Rouge swept to power. This is a Free Cambodian soldier with his weapon & what mattered most him.  Most likely he died in the next 12hrs when there was a massacre of 20,000.  It was taken in Phnom Penh, Cambodia on April 17, 1975.  The photographer said bullets were flying as this photo was snapped."


This photo struck me hard.  Light and darkness to the nth degree captured in one picture.  While tempted to pontificate on the depth and power of this photograph, I feel it is best to let the picture speak to you, rather than me muddying the message.


Never forget your music is a light in a dark world. Never underestimate its value - or its power.