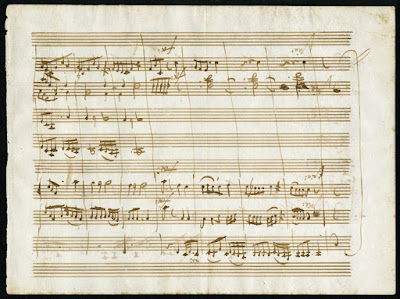 Hand written by the master - Wolfgang Amadeus Mozart
As guitarists, it is all too easy to overlook the wonders of the fundamentals of music.  When you stop to think that the sound waves emitted from vibrating strings can communicate emotion and alter a listener's feelings or mood, the mystery of the what transpires behind the curtain of audible sound in intriguing indeed.

Consider the note.  Notes are the atoms of music - the building blocks of all melody and harmony, bound together by time, distinguished by color/timber, with radioactive half-lives of varying durations (e.g. half notes, quarter notes, eighth notes, etc.), and set apart by the deep void of space (silence).

In physics there are two primary fields of study - the macro and the micro.  The macro is the universe - the cosmos - and its mind boggling infinite boundaries, history, future, quasars, and black holes.  The micro is the subatomic - the neutrons, electrons, protons, quarks, strings, and so forth which interact in mind boggling mechanics to form matter.

In music there is also the macro and the micro.  The macro is the genre, the history, the culture, and the evolution of music.  The micro are the sub-song components such as notes, silence/rests, chords, timing, texture, feel, melodies, harmonies and passages.  Today I'm looking at two of the micro components of music - notes and passages.

NOTES
At its most basic and fundamental level, what is a note?  While a note may have pitch, timbre/color, intensity/volume, and duration, the primary definition of a note is that it is a brief message.  Yes, every note ever played is a brief message.  Some of these notes are meaningless drivel, such as a mindless reminder on a Posted Note at work that tells you someone's phone number.  Other notes will cherished and saved for a lifetime - such as notes from loved ones which hold great meaning. 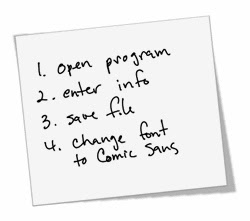 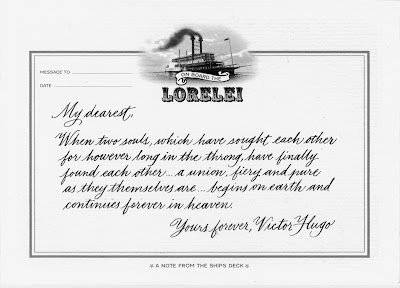 So try this.  Sit in a dark room and play one solitary note and LISTEN as it fades away.  What message is in that note?  Is it a work phone number that is destined to be thrown away the next time you clean your desk, or is it a note to your lover expressing a short - but heartfelt - expression of feelings that they will keep forever?

The content of the note is determined by the one who writes it.  Is it trash or treasure?  As you sit in the dark playing one solitary note after another - and listening to them fade into the darkness - what is the content of these notes?  What do they say?  More importantly, what are you saying in that note?

Give this thought and practice and in due time your music will carry a depth of meaning far greater than its current content.  Having the vision, the target, the awareness that your guitar is both pen and paper for the notes you are writing is the first step towards creating music with meaning.  If your music is SAYING SOMETHING you will find a greater appreciation of it from your listeners. 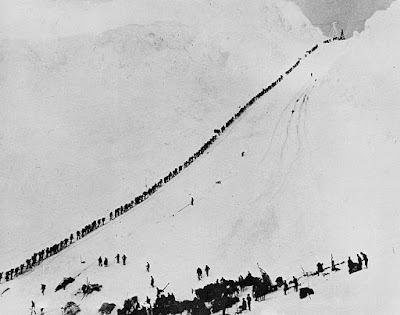 The Golden Staircase During The Alaska Gold Rush In The Last Years Of The 19th Century
(click on image to enlarge)
Now give thought to a passage.  What is a passage?  A passage is something that takes you from one place to the next place.  There are hidden passages, underground passages, mountain passages, jungle passages, etc.  Doorways, trails, tunnels, and tracks that transport you to new destinations.

In music a passage is usually thought of as a brief phrase of music with a beginning and an end.  But it is too easy to undervalue this important component of musical communication and relegate it to mere musical Lincoln Logs used to build a larger structure.

I want you to imagine this event.  You are playing guitar in a club, a bar, a church, a concert, a park, wherever, and people are LISTENING to you play.  It comes time for you to solo.  One approach is to throw out a bunch of licks and scales which have mostly academic and gymnastic origins behind them - impressive displays of technique, skill, and ability.  The better approach is to play a PASSAGE - a sentence, a statement - then take a breath and punctuate that passage with a period, a coma, a question mark, a quotation mark, or an exclamation mark.  Imagine your audience before and after that passage.  You've said something on your guitar which has taken them from the place they were before the passage began, to a new place - perhaps a familiar spot or one they've never been to before.

Think of breaking your playing up into phrases - each one worth hearing.  Play a phrase,  "I'm taking you here!  I'm taking you there!"  Play a phrase, "I'm pouring out my heart here - can you hear it?"  You might be slapping your listeners in the face, or caressing them with healing medicine.  You might be venting your pain, or sharing your joy.  But you are taking them with you on a passage to a new place.

People listen to music because they want to be taken away - and the farther away you can take them, the more they will want to listen to you.
Posted by David at 9:02 AM