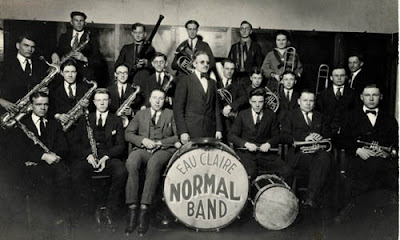 You only get to live one time - once - that's it.  When you are 90 years old and looking back, will you wish you had played it safe, towed the line, conformed to everyone else, and marched in step with the rest of humanity?  Or will you look back and be thankful you lived life as YOU, venturing into unexplored regions, following your instinct, enjoying your individualism, setting the new standard vs. following one, making history vs. studying history, etc.?

Albert Einstein said, "He who joyfully marches to music in rank and file has already earned my contempt. He has been given a large brain by mistake, since for him the spinal cord would suffice."


Its tricky - trickier than you think.  From a thousand feet up many non-conformists have their  uniforms and lifestyles dictated by the culture of "non-conformity" to which they are drawn.  The same holds true in music.  The first punk rock band was touching something new.  The one thousandth punk rock band was "non-conforming" to a pattern which had been well established by a culture and in doing so was actually conforming to a mold which dictated sound, looks, and lifestyle.


I want to encourage you to look at the true musical DNA that is within you and follow the trail that will lead to the ultimate fulfillment of that music maturing into an awesome and unique addition to the sounds that compete for ears on this planet.  You can dress like a punk rocker and sound like a punk rocker and be just as much a conformist as the corporate accountant wearing a three piece suit.  Dare to be really different, for in that path lies your life and your music.  There is a lot of music history waiting to be made.  Someone is going to do it different - come up with a new style of guitar playing, or even a new genre of music.  Is it you?


Two roads diverged in a yellow wood,
And sorry I could not travel both
And be one traveler, long I stood
And looked down one as far as I could
To where it bent in the undergrowth;

Then took the other, just as fair,
And having perhaps the better claim,
Because it was grassy and wanted wear;
Though as for that the passing there
Had worn them really about the same,

And both that morning equally lay
In leaves no step had trodden black.
Oh, I kept the first for another day!
Yet, knowing how way leads to way,
I doubted if I should ever come back.

I shall be telling this with a sigh
Somewhere ages and ages hence:
Two roads diverged in a wood, and I --
I took the one less traveled by.
And that has made all the difference.
Robert Frost 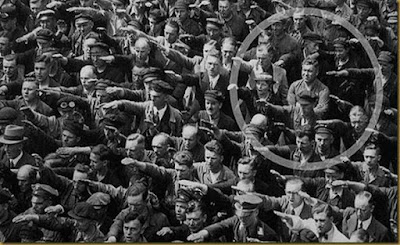 The photo above was taken in Hamburg in 1936, during the celebrations for the launch of a ship. In the crowed, one person refuses to raise his arm to give the Nazi salute. The man was August Landmesser. He had already been in trouble with the authorities, having been sentenced to two years hard labour for marrying a Jewish woman.  We know little else about August Landmesser.